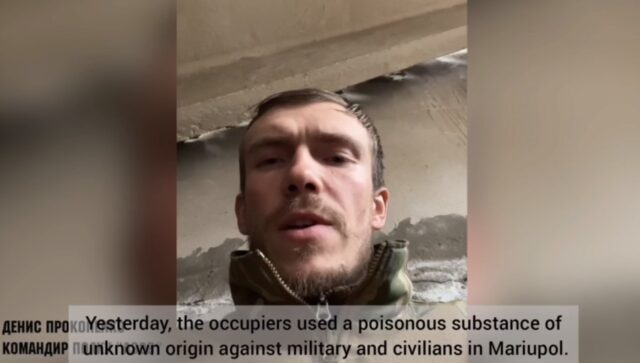 The victims of the spread of a poisonous substance of unknown origin in the city of Mariupol are in a relatively satisfactory condition. Contact of the civilians with the substance was minimal, for the lesion epicenter was at a certain distance from the location of the people. The military were a little bit closer. However, it is currently impossible to fully investigate the scene due to the enemy fire, because the Russians continue using the tactics of concealing their own crimes.

In the video, one can see a military in a moderate condition. The other two are under constant medical supervision. An elderly woman has the worst condition among the affected civilians.

The main symptoms of the victims are the following: facial hypremia, high blood pressure, dryness and heartburn in the oropharynx and mucous membranes of the eyes.

It is clear now that the enemy used the poisonous substances or potent poisonous substances, mainly the suffocating ones. However, due to a complete blockade, their toxicological analysis is impossible. At the same time, the main task is to monitor the condition of personnel and possible consequences of poisoning.