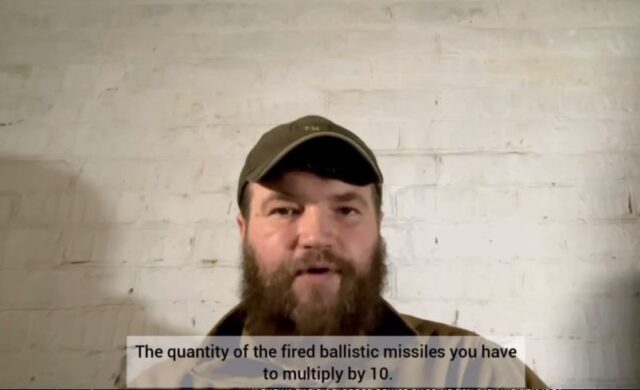 Hello! Dear Ukrainians, you often see in the news how many horde’s enemies the defenders of Mariupol destroy every day. But I want you to understand that every day of the city defending costs our heroes lives.

If enemy aircraft dropped bombs on some city, then multiply it by 100. The quantity of the fired ballistic missiles you have to multiply by 10. Also add to these ground and naval artillery and you will get the usual day of Mariupol defender. The defender who, even after being wounded, goes into battle again, because we have no right not to fight!
There is the heroic rank of our military behind the successful operations – Azov fighters, marines, border guards, soldiers of the National Guard and others.
You must understand and learn from the history of Ukraine. There are a lot of bloody events in it.

Remember Baturyn in 1708, where horde of Moscow freaks killed about 20,000 civilians according to the various sources. At that time the defenders of the city did not hold the defense.

As for now, according to the recent estimates, there are more than 100,000 Ukrainian civilians left in Mariupol. And now, just imagine that we will stop fighting, and what the drunken orcs being in the euphoria and impunity will do with our citizens. Multiply everything you have heard about their crimes in Ukraine by 1000 and you will get the result. In 2014, these civilians expelled the “Russian World” from the city, driving it away from Ukraine, do they deserve it?

The chevron of our unit depicts a monogram with two letters that means the idea of fighting for the interests of the nation, of our citizens and territorial integrity. And we believe that in this struggle people will become a real nation. And being a nation means to be united for a common goal. Our aim is to survive and to win this war.

We believe that the operation of Mariupol unblocking will be a part of history as a heroic feat of our people. But if unblocking doesn’t happen, it will become history’s great shame and another Baturyn.